William Shakespeare: His Influence on the English Language

The history of the UK tells a tale of excellent literature, with many of the world’s most famous writers heralding from its shores. Names like Charles Dickens, Jane Austen, William Blake, Geoffrey Chaucer, George Orwell spring to mind during the Elizabethan and Victorian eras (although George Orwell was born two years after the death of Queen Victoria!). However, just to ice the literary cake – famed poets also came to the fore: Samuel Pepys, John Milton, William Shakespeare - this is a surely a great reason to learn English in the UK!

It’s very possible that every single schoolchild in the English-speaking world has read his work. Shakespeare produced a huge body of work during his 52 years of life, including thirty-seven plays, four poems and an entire collection of sonnets. Shakespeare’s birthday is usually celebrated on the 23rd of April, which many believe was also the date on which he died in 1616. In Shakespeare’s hometown of Stratford-upon-Avon there are usually parades and events held on this day to celebrate his huge contribution to the English language!

The Man of Fifteen-Thousand Words

It’s estimated that Shakespeare used as many as fifteen-thousand unique words in his plays alone. To put that into context, that’s around nine-thousand four-hundred more unique words than the entire Old Testament of the Bible, Qu’ran and Torah!

It’s very interesting to explore how Shakespeare invented new words to express his characters’ emotions or actions in the way he envisaged them. Perhaps he found middle-English inadequate? If so, we’re glad he did. Inventing new words is called neologising and the new words themselves are called neologisms. Some neologisms that have appeared recently include App, Google (as a verb, that is) or Staycation! Can you think of any more? It’s estimated that, in total, Shakespeare introduced over 1,700 neologisms into the English Language. Well, how about that!

5 Words you (probably) never knew were invented by William Shakespeare: 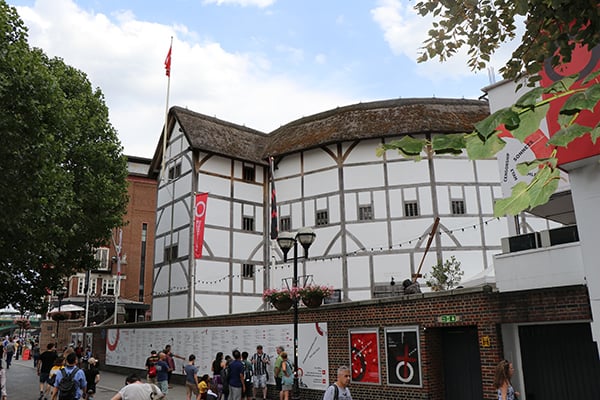 Slang (also known as a colloquialism) allows cultures to communicate more efficiently and creates stronger shared understanding of everyday phrases among members of that community. What would you say if someone asked you to pass the dog and bone? Nothing, because if you knew Cockney Rhyming Slang, you would just pass them the telephone!

These 5 wondrously English phrases are all thanks to ‘the bard’ – an affectionate name for William Shakespeare:

5: ‘All that glitters is not gold’ – The Merchant of Venice

The hidden stories of the English language are amazing, aren’t they! If you need some help getting ready to be tested on them – how about some great English Exam Preparation?

If you fancy learning where Shakespeare wrote some of his best pieces why not choose to learn English in London or sign up for an English Course in Cambridge!