Everything You Need to Know About Cricket!

This week Stafford House Canterbury Activity Manager for juniors and groups, Mark Jackson, is running an introduction to the gloriously British sport Cricket as a fundraising event for our school charity United World Schools. He’s taken some time out of his week to tell us a little more about it.

Cricket is played all over the world. Full member nations of the International Cricket Council include England, Australia, New Zealand, South Africa, India, Pakistan, Zimbabwe and the West Indies, Cricket is very popular in these countries, but it is also played in others. Afghanistan, Ireland, Holland, Hong Kong, Oman and Scotland were represented in the 2016 World Cup.

Cricket is very difficult to explain to someone who is new to the sport. A novelty Tea Towel (which we love here in Britain) tried to explain it like this:

‘You have two sides, one out in the field and one in.

Each player that’s in the side that’s in goes out and when he’s out he comes in and the next man goes in until he’s out.

Sometimes you get men still in and not out.

When both sides have been in and out including the not outs.

That’s the end of the game.’

Test matches have a scheduled duration of five days and usually have at least six hours of play each day; there are formal intervals on each day for lunch and tea with brief informal breaks for drinks. There is also a short interval between innings. This format is played by professional cricketers. They will be dressed in whites (white clothing) and use a red ball.

One Day matches have limited overs cricket because each team bowls a limit of typically 50 overs, has a planned duration of one day. They will wear white or coloured clothing using a red ball with white clothing and white ball for coloured clothing.

T20 (or Twenty20) was designed so that the whole game could be played in a single evening, in which each team has

innings limited to twenty overs. They will wear coloured clothing and use a white ball.

Local club cricket teams (which are usually Villages) consist of amateur players. There games will vary in length between 40 and 50 overs per side with an interval for tea at the weekend and the 20-over format in the evenings.

The Cricket Tea is a wonderfully British thing. Players (and spectators) during the interval are treated to a delightful range of sandwiches, sausage rolls, scotch eggs, pork pies, scones with cream and jam, Victoria sponges, fruit cakes, Jam tarts and all washed down with some English tea in a cup and saucer.

In Canterbury we have a professional cricket team the Kent Spitfires, named after the aeroplane that played a major part in achieving ultimate victory in World War Two. They play at the St Lawrence County Cricket Ground, which is a sports stadium just 10 minute walk from the school. This cricket ground was famously known for having a large Lime Tree inside the field of play. Unfortunately this was blown over in high winds a few years ago and a new Lime Tree was replanted just outside the field of play.

If you are interested in watching a game of cricket when you are in Canterbury, I recommend going to a Kent Spitfires T20 game. It’s fast paced, big hitting and jolly good fun. Spectators often come in fancy dress, singing and chanting the night away. Music is blasted over the speakers during intervals and other entertainment is also put on. 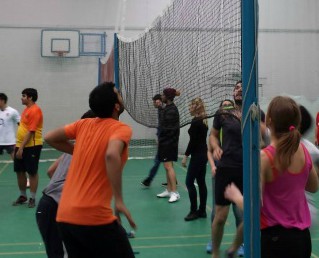 The St Lawrence County Ground is also the venue for Stafford House Canterbury’s weekly sports afternoon. Every Friday afternoon we play a selection of Football, Volleyball, Basketball, Badminton and Table Tennis with all our friends made at the school.