All the World's An English Class

I was trained as an actor, but for several years I had barely thought about my degree. When I began teaching the ‘Speaking with Drama’ English class at Stafford House, all the things I had studied came rushing back to me. I looked forward to sharing the warm-up exercises, drama games, and the thrill of performance with my new students.

In every English class, students have a wide range of complementary strengths and weaknesses. It was important to me that students use their strengths to improve their own and their classmates’ English language skills.

The first day saw the new students come into the classroom and it was quickly apparent the words acting and theatre
made them nervous. We worked with a planned English lesson in our books and after a couple of minutes the first improvisation began. The students were asked to create characters and then swapped the ‘people’ they had created.

This English lesson’s goal was to build vocabulary and to use practice questions. They acted out a scene and used the new vocabulary perfectly and maintained the natural flow of conversation. They also had to think on their feet about their character and I saw their confidence in speaking and interaction quickly improved from the first class.

Students wrote and performed their own three scene plays in English by the end of the first week of class.  The students were cast in roles that made sure everyone would challenge their English level and yet still be an enjoyable experience. On Friday, performance day, the students finally saw the fruits of their labour. They went about saying the lines, acting it out, and planning movement.

The more confident students were starting to speak from memory, but other students needed the safety net of the lines in front of them. But with a time limit of just 5 lessons to make and produce a whole piece of theatre and build the necessary confidence, we achieved more than even I had hoped for. A group of teachers made up the audience and for 15 minutes they were wowed by our student play. 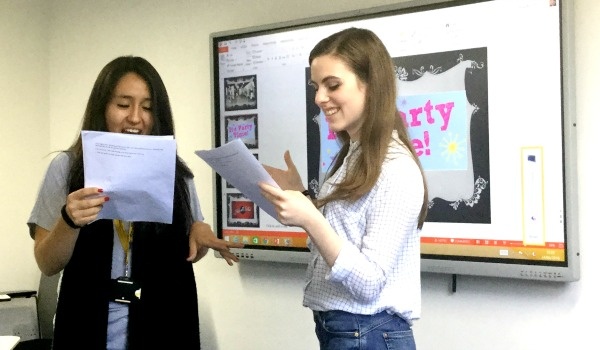 The students got so much from it: the excitement of producing something, the confidence of working together and the specific roles each class member took from director to supporting cast. They had learnt how to work together and create a piece of theatre from scratch, to use different question forms and write their own  It was more learner-centred than I could even have hoped for. Now the week finished to a standing ovation from the teachers.